(you may consider playing all at once)
Posted by folks at 10:57 AM No comments:

Some video proper from another player of extensive folktek works. Nice work Kegel!

Some video proper from a player of extensive folktek works...Lookin good Ether^ra

A work by Ben Houston and Arius Blaze combining the synthesis from the subharmonic field by Arius Blaze, the hand plate of the electric hands by Ben Houston and a nice analog delay with slide controls. This was a co-missioned work by special request. The box is hardwood and custom. The Analog Hands is an extremely nasty thing with gut wrenching, ear piercing noise or nice fat analog tones that are altered by where you touch the plate, what points are combined as you press and how hard you touch the plate. We also added some optical controls for the delay in a custom resin lamp which is reminiscent of the old styles (mostly pre-2000) of Arius Blaze. 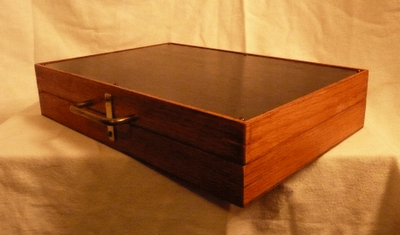 Created by Arius Blaze on Comission - one of the drum scape series housed in a beautiful antique radio test box.

Thick lush sound based on the same circuitry as the original "Simian Drum Scape":.
Posted by folks at 10:08 AM No comments:

More info on the Time Scape in the post below: Time Scape
___________
Below you'll find the samples (medium quality mp3) as well as some explanation of what's happening. Please excuse any clipping or peaked levels in the recording - I'm experimenting with new recording software. None of this is edited except where it says otherwise and no external processing is ever used.

These first three samples are the internal sounds of the Time Scape - no external processing, no incoming sound and no use of the Scape Sequencer. They do utilize the onboard auto patching and excess feedback.

These next samples go through some of the real-time, time-based alteration using the auto patch and auto add funtions, no sequencer, no external effects. The sound source is from my mp3 player - John Zorn, Satie, something unknown - the alteration is great enough to where it doesn't much matter what the sound source is, except that it be hard or soft - most of this is on the soft side.

Here, bits of Satie are sent into the analog style delay and the excess feedback potential (utilizing the high pass and low pass feedback touch points) is explored

The following are all loop-based recordings with the sample source being whatever's playing on the mp3 player, no external processing.

The first is a recordings of a single loop captured and altered by patching the Scape Sequencer into the patchbay on the Time Scape. John Zorn, a simple beat which begins with a subtle exploration of the use of the sequencer and time based patches but as the recording goes on the beat gets gradually more twisted, adding some ring mod, IDM madness, repeats of beat parts and finally returning to its source.

This recording is another captured beat twisted up gradually with the use of the sequencer - adding parts, subtracting parts, changing patches.

Here is Missisippi John Hurt live looped - "Candy Man" being altered by the sequencer. A bit long and perhaps annoying, but still it shows some of the timing variations

Here is John Zorn looped, fuqt with on the sequencer for awhile, later added to and eventually becoming a chaotic insane mess.

Last but not least, sections of longer recordings where playing the entire mess would be redundant - This is whatever is playing on the mp3 player being looped and altered with the use of the sequencer. 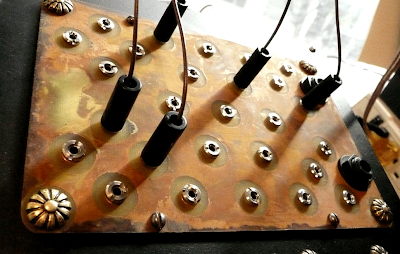 
The Scape Sequencer created by Arius Blaze, was originally designed as an accompaniment to the time machine or any of its close cousins, ie. the Time Scape, however, it is made to work with any piece of gear that has a point to point patchbay including any of the patchable folktek works.

It gives entirely new dimension to everything we've tried it out with. Playability is simple - there are two "mains" to control respectively, parts 1-4 and parts 5-8 of the whole 8 part step sequencing - these are patched to any points on the main patchbay, then parts 1-8, any or all of them, are patched to alternate points on the patchbay making switches as the step proceeds. It has a clock in and clock out. In the case of using this with the time scape, as an example, the clock in can be sent to various points on the time scape patchbay thereby synchronizing to the time scape timing and repeats.

In addition, parts can be added with the "add step" button, so intead of having one part proceed step by step, any number of parts can be addedcreating a matrix effects and connecting multiple points at once and in succesion. Parts can then be subtracted as desired using the "subtract step" button.

Furthermore, all parts can be erased at once or the step can be paused with the push of a button.

There is a time knob and a swing knob to control timing variation.

The lamp section is custom, the low profile and small hardwood box is custom and all of the buttons are handmade.

In the following two videos the Scape Sequencer is used to control the Magnetic Bug by Ben Houston allowing glitchy phrases to be made and repeated - something that is otherwise impossible without first sampling and rearranging. Additionally, we've discovered the capability of pulling fourth sounds from the bug, not necessarily displayed in these videos, that we've previously not heard.

In the post below, you'll find photos of the Time Scape, also currently available, displayed with the Scape Sequencer. These two pieces together generate a world of possibility.
Posted by folks at 12:12 PM No comments:

(this piece is currently available. go to the for sail page on ariusblaze.com for more details.)

The New Time Scape created by Arius Blaze is designed for analog style delay, thousands of variations for effecting incoming sound and extreme sample fuqwithing. This work has automated patchable effects which amongst many other things can be made to process sample timing, allowing you to cipher through parts of a sample as it repeats or toggle back and fourth between any variation of ring mod or compression for example.

It functions as a standalone piece by activateing the excess feedback and generating fields of sound.

There are expansion options for the Time Scape. Adding the "Scape Sequencer" to the mix allows you to automatically sequence any of the patches and when tapping into the timing mechanism, resampling will rearrange bits and pieces of the incoming sound in time with the sampler - making it something of an automatic remix machine. Sending various points in the patchbay out to the clock in on the sequencer allows the sequencer to be synchronized with the sampler time adding repeatable results. The points can also be sent to the clock in on any analog gear or from the clock out on the sequencer. 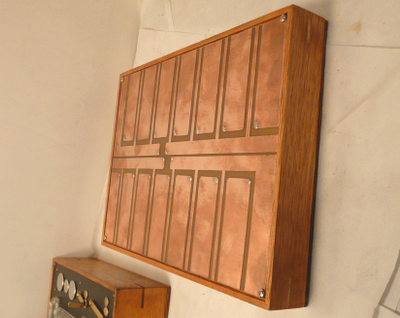 Custom hardwood box, all custom buttons and switches, custom etched board, custom lamps. Currently available. Go to the Time Scape page for more details and sounds: http://ariusblaze.com/soundart/delay/timescape.html
The touch board and the sequencer are offered seperately as expansion options.